A 14-year-old girl was electrocuted as she charged her phone while bathing in Texas, US.

Madison Coe was in a bathtub while she used her cellphone which was being charged at the same time. She had carefully put the device on a towel to keep it dry but fate struck her, taking her life.

Before she breathed her last, Madison sent a picture of her bathtub and a text to her friend saying: “When you use [an] extension cord so you can plug your phone in while you’re in the bath.” 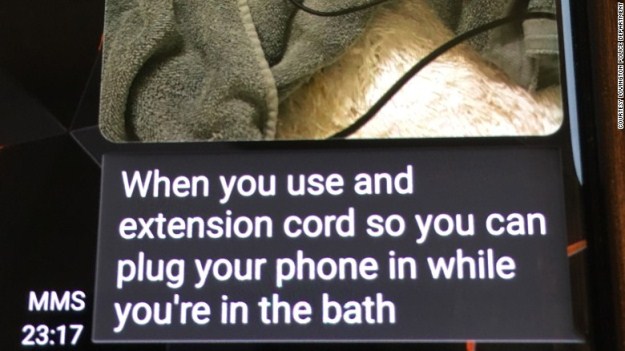 Police believe Madison Coe, 14, sent this message to a friend before she was electrocuted in her bathtub. PHOTO COURTESY: CNN

The police investigation carried out following the incident also concluded that Madison died because of the electrocution on the night of July 9.

Her family left the message in the wake of her death and regretted how easily they used to do the thing unaware of the consequences.

“She had her phone plugged into the extension cord and it was by the bathtub, and I did it, she did it, we all had sat there in the bathtub with our phones plugged in and played our games,” her stepmother said.

Madison was using Samsung 6s Edge and the initial report has suggested that her mobile phone on charge had not fallen into the bathtub but she would have incidentally touched the charging cord.

“There was a burn mark on her hand, the hand that would have grabbed the phone,” Madison’s grandmother said.

“The bathroom is a place for showers and personal time, and your phones don’t belong in the bathroom. Electricity and water do not mix. All it takes is a drop,” she added.

The article originally appeared on CNN.

The post Girl electrocuted in bathtub with her phone on charging appeared first on The Express Tribune.